The term Borderline was first introduced more than sixty years ago to describe those who fell between being psychotic and neurotic but could not be classified properly as either. Although this concept was rejected in the seventies, the name has stuck.

The primary features of Borderline Personality Disorder (BPD) are impulsivity and instability in relationships, self-image, and moods. 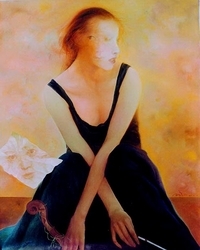 BPD is the most common of the ten personality disorders defined in DSM-IV (DSM-IV: 2000), a personality disorder being a cluster of ingrained, long-standing traits in an individual, which are relatively inflexible and which result in maladaptive or destructive patterns of perceiving, behaving and relating towards others.

BPD characteristics overlap with those of other personality disorders, in particular histrionic, narcissistic, antisocial, schizotypal and dependent personality disorders, but can be differentiated by the BPD-aspects of self-destructiveness, chronic feelings of emptiness and desperate fears of abandonment (Kreisman & Straus:2004:6). About ten percent of in-patients, and twenty percent of out-patients, in mental health clinics satisfy BPD criteria, with a prevalence three times higher in women than in men.

The suicide rate in BPD sufferers is about 8 to 10 percent. However, over time, most BPD sufferers improve significantly, and almost half recover enough to no longer meet the defining criteria for BPD (Kreisman & Straus:2004:17).

BPD-related behaviour typically emerges from late teens to early thirties, although sometimes there may be indications earlier in children who suffer from severe separation problems or severe outbursts of rage. BPD can result from a parental relationship that is at one of the extremes of being too dependent or too rejecting. One of the symptoms of BPD is an inadequate sense of a constant separate identity, so disruption in social development in the age range of 16-25 months, when a strong sense of identity is usually being developed, may be an important contributory factor.

Some of the symptoms of BPD are relatively normal at adolescence, when individuals are normally dealing with such issues as identity, moodiness, impulsiveness and relationship insecurity. However, those with BPD-related problems may be distinguishable by tendencies to suicide attempts, violent rages or excessive drug use.

In their thirties and forties many BPD sufferers find a level of stability in their lives, with BPD behaviours becoming curbed, or no longer interfering significantly with their daily lives. Many of those diagnosed with BPD may emerge from it at this stage without formal treatment, and find themselves functioning from their midlife onwards. Thus BPD tends to be rarer in the elderly (Kreisman & Straus:2004:5).

Until about ten years ago, it was not considered to be very feasible to work effectively in therapy with BPD clients. However, there has been a great deal of research in the past few years on Borderline Personality Disorder, particularly in the United States.

Treatments involve psychotherapy in a one-to-one and in group settings are now considered to be feasible, especially when combined with medication such as anti-depressants or anti-psychotic drugs as needed. BPD clients tend to need long-term treatment, with symptoms such as impulsiveness and disturbed relationships often decreasing over time. Research indicates that about three in four cases no longer meet the criteria for BPD fifteen years after initial diagnosis.

The nine symptoms cited in DSM-IV can be subdivided into four primary areas in which therapeutic work may need to be carried out:

1. Mood instability (criteria 1, 6, 7, and 8)
2. Impulsivity and uncontrolled behaviors (criteria 4 and 5)
3. Interpersonal psychopathology (criteria 2 and 3)
4. Distortions of thought and perception (criterion 9)

Of these, it is advisable to primarily address the first two (mood instability), as these are the most important factors in relation to suicide risk. Often, BPD clients present multiple problems and this can pose difficulties for the counsellor in deciding what strategy to adopt. One approach that has been developed to address this is Dialectic Behavioural Therapy (DBT). This organises the course of therapy into a number of stages that prioritise the work with the client. (Krawitz, & Watson:1999:32)

The second stage of therapy is to address issues related post-traumatic stress related problems, such as those related to childhood sexual abuse. These are not tackled in therapy until the issues raised on stage one have been dealt with, as to do so could seriously increase the risk of self-injury.

Once these issues have been addressed, it is possible to focus on issues related to self-esteem, and any other issues which arise with the client.

The recommended prioritisation of therapeutic goals for BPD is as follows:

Borderline patients have been described as the therapists nightmare, because they often tend to have a special kind of appeal that inspires others to rescue them, but tend to be help-rejecting complainers who are remarkably attuned to their caregivers negative feelings (Yeung: 2005:1). BPD clients can be demanding, manipulative, disruptive, frustrating, non-compliant, and hostile, especially when not on medication.

When I cannot control my surroundings, I become nervous and angry. It gets much worse when I am under stress. Everything negative comes in full blast and overwhelms me. When triggered, I can go from perfectly calm to full-blown, white-hot rage within a fraction of a second. I feel as if Im under siege and that everyone else is just daring me to ventilate my anger so I can get into trouble.

I think my temper comes from the abuse I suffered when I was a child. At some point, I decided that I didnt have to take my parents abuse any more. Raging back became a matter of survival. So now its hard for me to feel concerned about the other persons feelings  in fact, I want them to hurt because theyve hurt me. I know this sounds bad, but thats the way I feel when Im in the middle of an outburst. Im just trying to survive the best way I can.

Alan wasnt overtly mentally ill. His offence was, sadly, common enough: he had assaulted an old woman. But he hadnt any obvious motive. Although he hadnt broken into the womans home, Alan had made no attempt to take anything. Instead he had beaten her badly in her bed. She was deaf and had not heard Alan entering her house while she slept.

Alan showed no remorse when he was interviewed by the psychiatrist. He said that he had attacked the woman because he had seen her many times in the local shops and he had been annoyed by her loud voice (she did not wear a hearing aid when and tended to shout). He was easily annoyed, he said.

Sometimes I criticize my fiancés every move, telling him that if he loved me he wouldnt do that. When I belittle him and blame him I feel that I might be abandoned or embarrassed, or that he is somehow not showing me love. I feel fearful  so much so that my whole face changes. I am so upset that I yell and scream and knock over objects. My decision making is poor.

Just yesterday I threw out my engagement ring in the garbage during my rage at him. Today, I realized that I would be lost without him. He has constantly to prove his love to me. He cannot tell me he loves me enough. I expect him to cheat on me though I have no logical reason to.

Before I got better, if people didnt have any protection in place for themselves I would aim right at them. Play them effortlessly. Who doesnt want a target that they can sink, so to speak? But what I was doing, and what a lot of borderlines do, is not a game or a way to get kicks. Its about survival. People who had healthy boundaries in place left me feeling too defective, too out of control, and too vulnerable. (Mason & Kreger:1998:126)

Mason & Kreger (Mason & Kreger:1998:12) capture the experience of being in relationship with a BPD sufferer as follows:

Clients who persist in relationships with BPD sufferers may have tendencies towards codependency. Beattie (Beattie:1992:32) quotes Subbys definition of codependency as An emotional, psychological and behavioral condition that develops as a result of an individuals prolonged exposure to, and practice of, a set of oppressive rules  rules which prevent the open expression of feeling as well as the direct discussion of personal and interpersonal problems.

Living with my borderline husband Is heaven one minute and hell the next. I call his personalities Jovial Jekyll and Horrible Hyde. I walk on eggshells trying to please someone who blows up just because I spoke too soon, too quickly, in the wrong tone, with the wrong facial motions  whatever! (Mason & Kreger: 1998: 39)

Despite the abuse, I felt like I couldnt leave. How could I abandon someone whod already suffered so many misfortunes in life? I though that if I just tried a little harder, I could fix her and make up for all the abuse shed suffered when she was a kid. (Mason & Kreger: 1998: 39)

Mason, P. and Kreger, R. (1998) Stop Walking on Eggshells; Coping When Someone You Care about Has Borderline Personality Disorder New York: New Harbinger