A useful technique for helping you get a sense of what's going on for the person you're in communication with is to be aware of eye movements.

Studies have shown that there are typical patterns of eye movements that often correspond to types of thoughts and feelings. 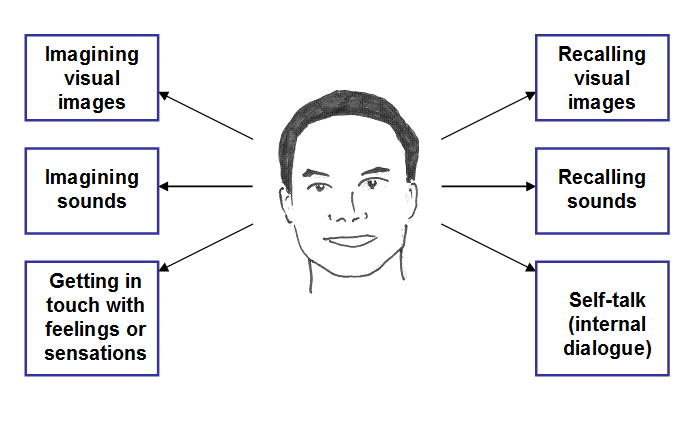 These are common ones, but it has been known to vary from person to person (usually switching left and right sides), so if you can, it's usually wise to test this out to make sure, for example, by asking questions like What colour is your front door? (visual recall) or What would the national anthem sound like played on a saxophone? (imagined auditory).

With practice, you can unobtrusively test this out - actively, by asking questions that are appropriate to the context, or passively,  by just paying attention to what the person is talking about and how it corresponds to eye movements.

Be aware though, that eye movements give you no more than hints and clues about what's going on for the person, and shouldn't be mistaken for factual evidence.  Be aware also, that these movements can be fleeting - it can take some practice to tune in to them.

Have you ever had the experience of a teacher in school saying to you or someone else "I don't know why you're looking at the ceiling. You won't find the answer up there." Well, turns out they were wrong. The person answering the question was probably in the process of visually recalling the answer (or searching for a visual image).

If the person's eyes are tending to move from side to side, one reason could be that they are remembering or imagining sounds or things said.

Looking downwards on the same side as for visual and auditory recall, can mean that the person is getting in touch with feelings, or sensations (such as touch - what might it feel like to bury your fingers in a wet rug?).

Where clients get caught up in words, or tend to rationalise their experiences, there can can be a lot of internal self-talk going on. These clients may tend to rely on explanation, justification, reason or logic, and may tend to dismiss or be out of touch with their feelings.

The places people tend to look when focussing on feelings and for self-talk are the left-right counterparts of each other. For this reason, some authors refer to the person who tends to rationalise as the wounded kinaesthetic - they have learned to retreat into internal dialogue as a way to avoid feelings that are too intense, so that, paradoxically, their apparent insensitivity may be a defense they have developed to cope with a high level of sensitivity.


Some authors talk about using eye movements to detect deception. That would be too strong a characterisation, but if you notice in the middle of a narrative where the client's eye movements are typically recall-oriented, that the client's eyes are flitting to the "imagined" side, then they may not yet be ready to disclose the whole story.

As a therapist, this can give you hints and clues as to what's going on for the client - specifically that there may be some aspect that they do not yet feel safe enough to disclose, and this, amongst the many hints and clues that the clients' words, actions and physiology hint at, can inform one's practice.   Clues are not evidence, but a good detective is one who is good at spotting the clues that tell him or her where to look for evidence.