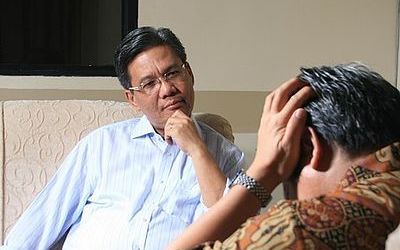 I think we have no realisation of the fact that real empathic understanding is one of the rarest things in the experience of any of us.  Carl Rogers

Active listening with the goal of empathic understanding has a very strong focus on the feelings being expressed and to responding to those feelings.

When you feed back your perceptions of the emotions that the other person may be experiencing, this is called reflecting feelings.

Reflecting feelings, in the person centred model, is not a technique. It is not simply repeating back to the person what they are saying. It means sensing feelings of which the person may be scarcely aware. It means helping the person name feelings and experiences that they have not yet put into words. It means letting them know that you are truly entering into their world:

[A man, over a number of sessions, has been making some vaguely negative statements about his father]

Therapist: It sounds as though you may be angry at your father.

Therapist: Dissatisfied with him?

Therapist: Disappointed in him?

Reflecting feelings should always be done tentatively  owned as your own perceptions. Be ready to accept that sometimes your perceptions will be inaccurate.

The Power of the Core Conditions

To let someone know what is really going on for you, who you really are, and at the same time to experience that in being deeply understood you are genuinely found to be truly acceptable and accepted, is one of the most powerfully therapeutic experiences you can have:

The way of being with another person which is termed empathic has several facets. It means entering the private perceptual world of the other and becoming thoroughly at home in it. It involves being sensitive, moment to moment to the changing felt meanings which flow in this other person, to the fear or rage or tenderness or confusion or whatever, that he or she is experiencing. It means temporarily living in his life, moving about it delicately without making judgements, sensing meanings of which he is scarcely aware, but not trying to uncover feelings of which he is totally unaware, since this would be too threatening. It includes communicating your sensings of his world as you look with fresh and unfrightened eyes at elements of which he is fearful. It means frequently checking with him as to the accuracy of your sensings, and being guided by his responses.