The triangle of insight

A useful way of of thinking about exploring the client's transferential experiences (experiencing people in present situations as if they were significant figures from the past) is in terms of the triangle of insight (Jacobs 2006:26). 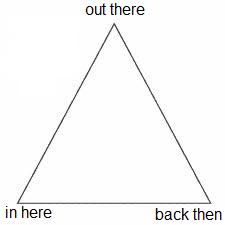 When working with transference, we are helping the client make connections between three contexts:

The most effective of these, therapeutically, usually involves working with "in here" - that part which is experienced in the counselling room, between counsellor and client, when the client is directly in touch, in the here-and-now, with those old feelings, and experiences them towards the counsellor, so that they can, if expressed, be very immediately and powerfully explored.

It is valuable, in gaining insight, to be able to make connections between what is going on in the client-counsellor relationship now and the clients past experience of relationships (back then), to work with the transference. The following example is from Kahn (1997):

Client:  " Yes, as a matter of fact, I am kind of angry, (pause) I kind of get the idea that you dont approve of this relationship that Ive started with this new woman Ive met. (pause) It isnt anything youve said, particularly. I just kind of get that idea.

Therapist:  I think that we learn a lot from you seeing me that way. Youve mentioned a couple of times that your mother let you know how much she disapproved when you began to go out on dates. (Client nods).

I wonder if were learning here that there was a good deal of buried anger in you back then. Perhaps thats why youre mad at me today and why you think I disapprove of your relationship.

Shes always criticising me. It was like you cant do anything right. If I tried to help more I was interfering, and if I didnt I was lazy ... whatever I did it was wrong.

Client:  Oh, yes. Joanna. My first wife. Whatever I did, it was youre useless or just let me do it, I cant wait all day for you to get it right.

Therapist:  Im remembering what you said about your mum calling you useless and how ashamed you felt when that happened. Im wondering if theres any connection between what happened with your mum and how you felt in those other relationships.

In general, though, you can make these links between any two points in the triangle, and in either direction.

Jacobs (2006) The Presenting Past; The Core of Psychodynamic Counselling and Therapy, 3nd Edition. Maidenhead: OU Press.